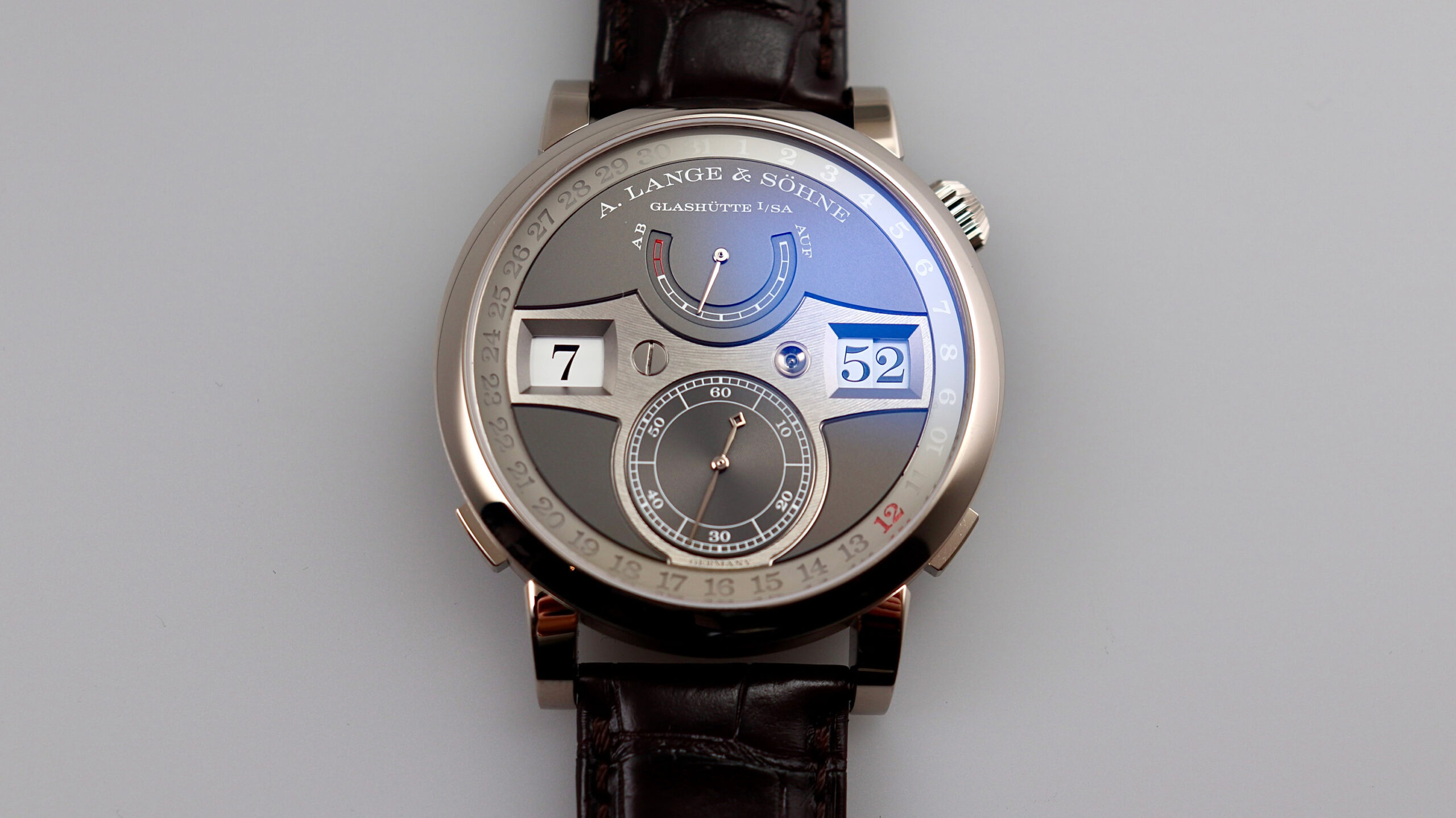 The brands arrange their product portfolios to cover the widest possible client base in accordance to their and the collection’s target. An example can be the diversification of Patek Philippe’s Nautilus: The collection starts from €30k and comes with different complications, metals in different price points step by step; the most expensive being the elusive 5740. On the other hand, the Zeitwerk was introduced in 2009 and with a cult following on its back, the collection expanded rather quickly until 2015. However, at the time, the price difference between the basic version and the Striking Time was around $40k – so A. Lange & Söhne needed something to fill in between. It was only logical for Lange to come up with an “update” to fill the void – and boy did they after 10 years: Zeitwerk Date

Zeitwerk Date was introduced in SIHH 2019, and it is the first mild complication for the family. Until its arrival, the collection was a platform for chiming complications like Zeitwerk Striking Time and Zeitwerk Minute Repater. By mild, I meant just the complication of course. Otherwise, Zeitwerk Date comes with vast and noteworthy improvements both on the movement and user experience, which deserves such lengthy article. 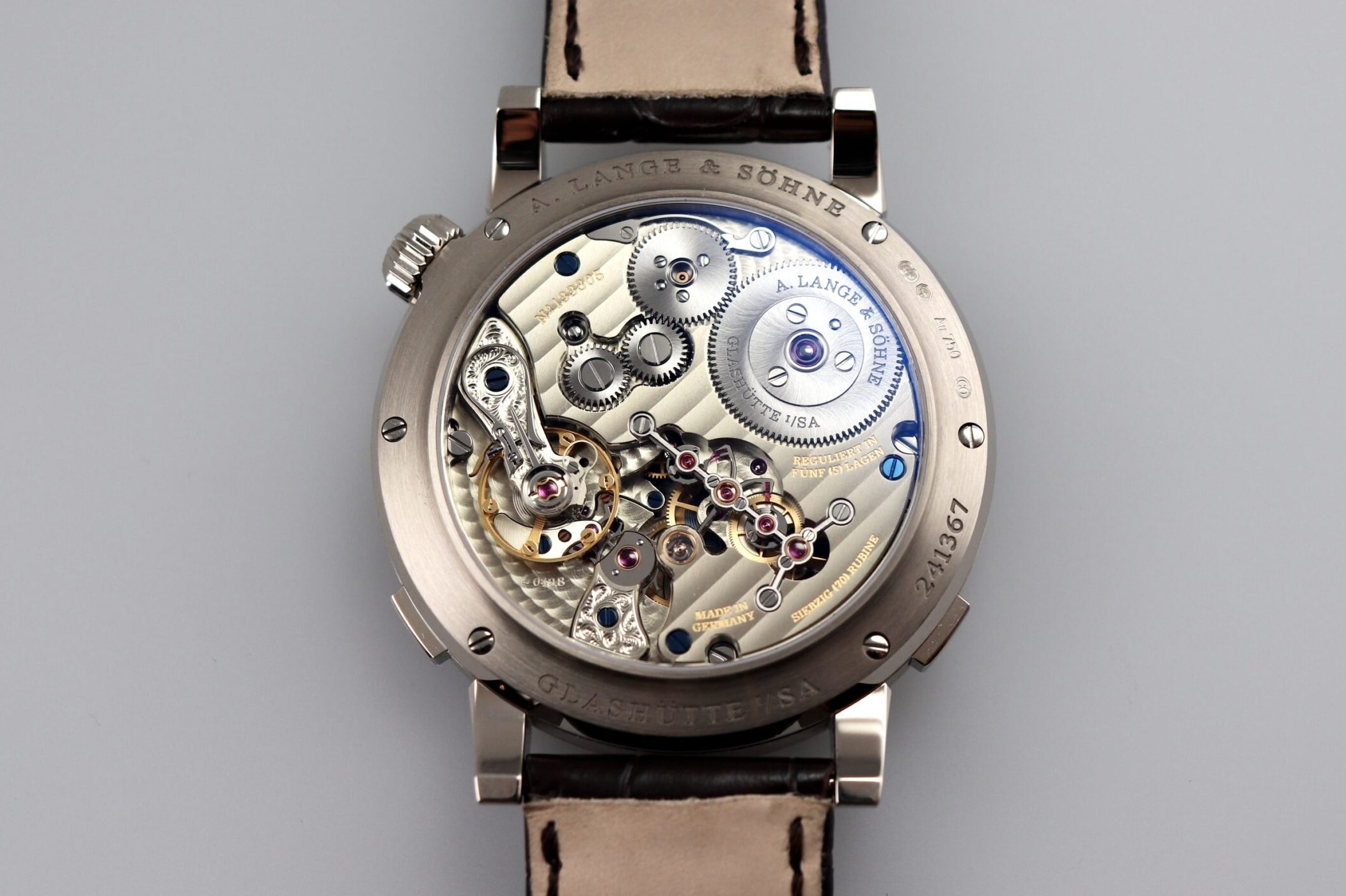 Zeitwerk Date measures at 44.2 mm in diameter, which is 2.3 mm larger compared to the basic version, and 12.3 mm in thickness which is a reduction by an extremely impressive 0.3 mm despite the doubled power reserve – more on this at the mechanism section. Tweaked proportions are instantly noticeable on the wrist, as the new Zeitwerk Date feels significantly thinner compared to its earlier and chunkier siblings.

As with all A. Lange & Söhne watches, Zeitwerk Date’s white gold case is robust and delivers a constructed feeling rather than a fluid and gentle one. I cannot think of a better case design to match the Zeitwerk Date’s futuristic and industrial composition. It is built on three-steps as case back, case band and bezel with alternating polish / brush finish. For me, the harmony between the brushed white gold and the grey dial is just marvelous, putting Zeitwerk Date ahead of all other pieces of the collection. The watch feels more coherent, more complete. The lugs are notched, separately finished, and soldered as usual. Thanks to the generous curves, at 44,2 mm, Zeitwerk Date comfortably hugs the wrist. 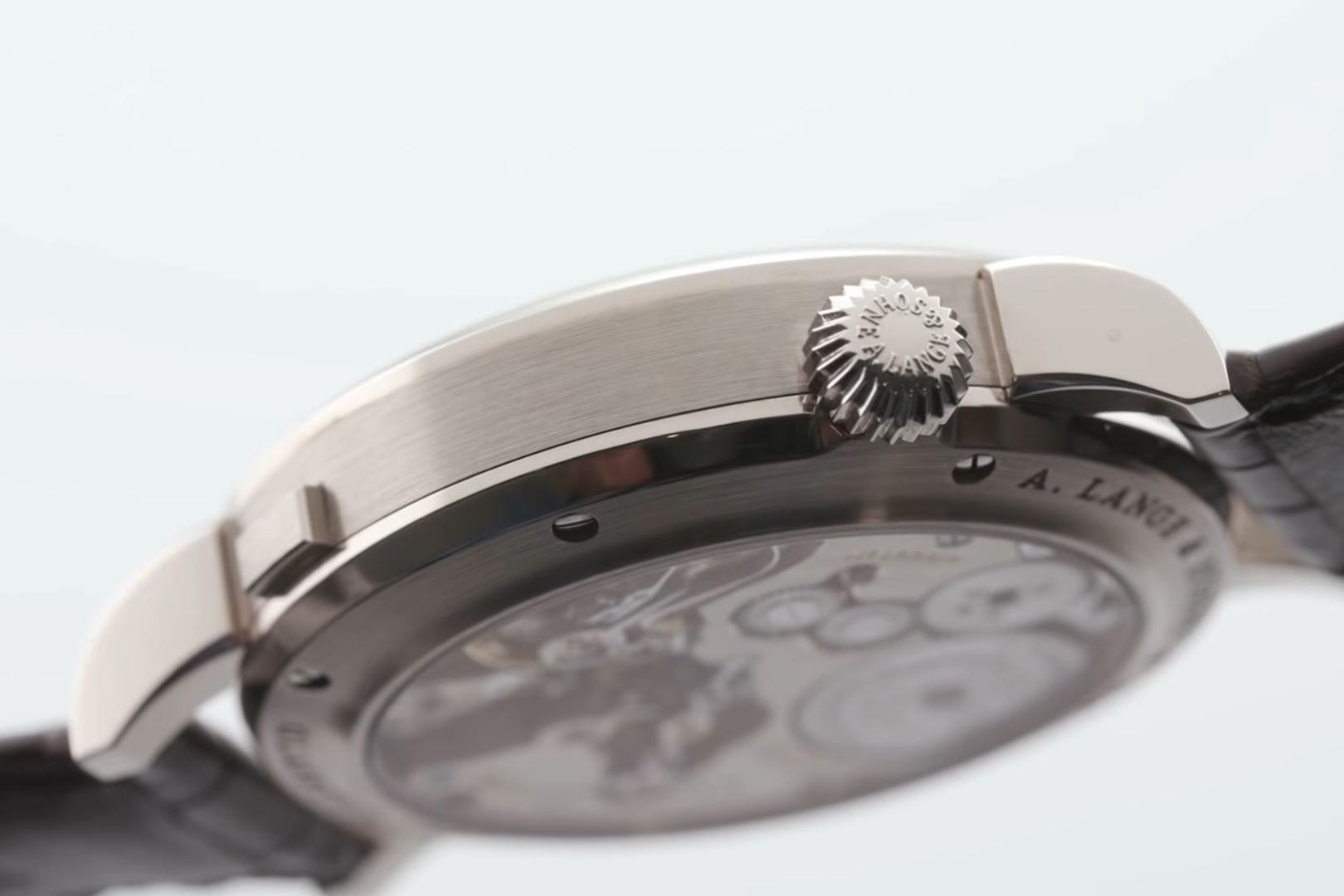 Furthermore, the two pushers; at 4 and 8 o’clock to advance the hours and date indication respectively. Instead of the usual press/activate function, Zeitwerk Date’s pushers are only activated upon release. The advantage of such an arrangement is that the force of the switching action is always consistent; hence, prone to any outside force. 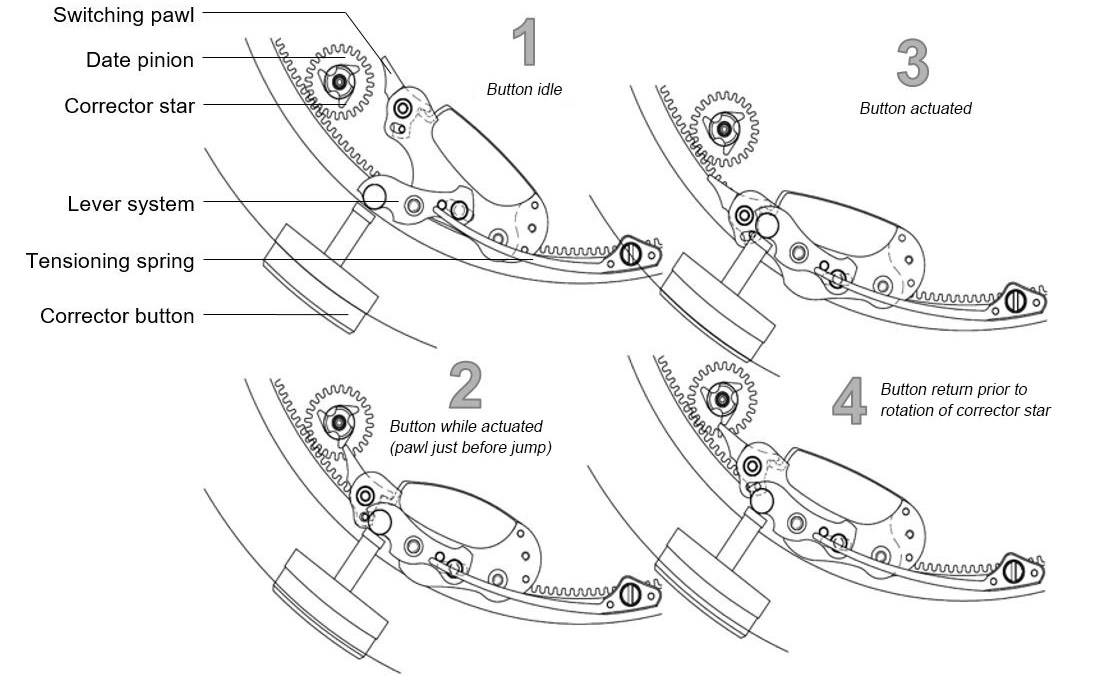 Upon hearing the rumors of a Zeitwerk Date, I started to think how it would be possible. Because there could not be any digital numerals on the dial due to lack of space and it would be utterly confusing. Perhaps a hand could’ve been added within one of the sub-dials, yet it was too “cheap” of an upgrade for Lange, or Zeitwerk for that matter…

All of these in mind, trust Lange to find the best approach: A Peripheral date ring. The added complication does not disturb the flawless ratio of the main dial (which is exactly kept) but further enhances and accentuates it. The balance struck on the Zeitwerk Date is astonishing. The date ring is a sapphire glass with cut-out numerals. A red marker beneath the ring is connected to the discs thus switches to the next date, simultaneously and instantly with the hours/minute’s discs. The precise nature of Zeitwerk is in safe hands.

Zeitwerk Date is the first piece of the standard collection to carry a grey dial. Lange was experimenting with grey dial / white gold case for quite a while with Datograph Perpetual and Triple Split but the Zeitwerk was reserved for silver and black – except for one relatively unknown piece: The grey Zeitwerk unique piece was made in 2011 for the Kids Horizon Charity Auction in Singapore. It makes a comeback here and received a warm welcome.

All pieces of the collection, no matter the complication, feature a monochrome appearance, using only various tones of a color depending on the case; which is mostly rhodium, white and black – with the exception of the Handwerkskunst edition. In this regard, Zeitwerk Date is the first piece of the collection to step-out of its comfort zone and offer red in power reserve and the date indication. A change I highly welcome!

Another lovely detail that I quite enjoy is the brushed German Silver time bridge. Essentially a part of the mechanism, Lange designers deserve a round of applause for incorporating this technical part into overall design in such a seamless way. It is just meant to be there and in perfect shape to accompany chiming complications too… 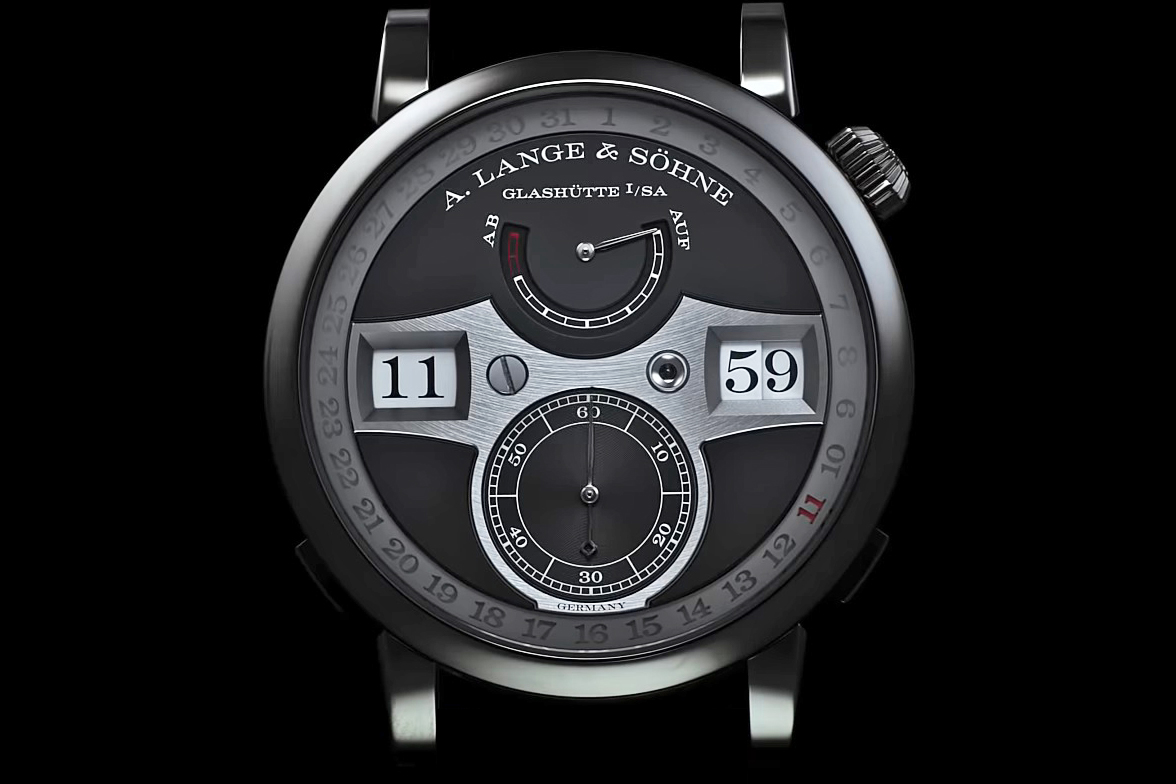 What I love in particular for Zeitwerk Date’s time bridge is its consistency with the overall appearance and details. Even though the bridge is brushed in every Zeitwerk model, the coupledom of its industrial, rugged look with the delightful grey creates something sensational. The watch flows from the time bridge to grey dial, to case band in constant alternating and harmony. Hence, to my taste, Zeitwerk Date is the best of the collection.

Almost every Lange watch is a treat on both sides, and Zeitwerk Date, both with what it shows and does, is a testimony to Lange’s motto and moniker as a movement maker. The last born of the family carries the splendid caliber L043.8; the eighth version of the basic L043.1 and comes with a myriad of upgrades. Engineering from Lange is like a gift that keeps giving, and the new Zeitwerk Date’s caliber is the final example. 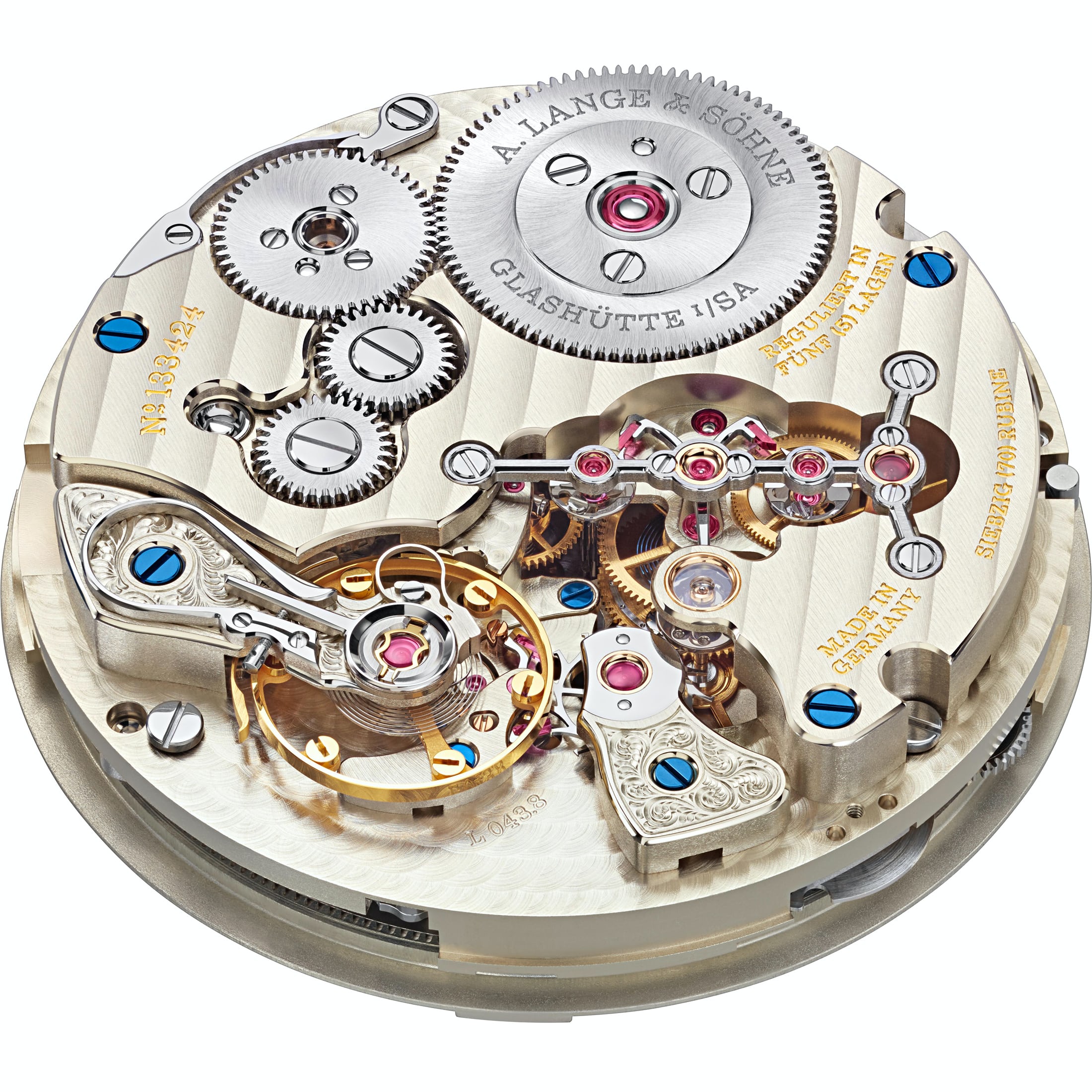 However, Zeitwerk Date’s caliber L043.8 is not only limited to its case back, not at all. As mentioned above, the time-bridge on the dial side as well as the date indication are part of the mechanism; hence each deserve a special look. Below you are going to find both the visual and technical walkthrough of the caliber L043.8, starting with the aesthetic perspective:

Caliber L043.8 is based on the original Zeitwerk caliber L043.1, hence they share a great visual similarity. The most striking departure from the old caliber is the remontoir bridge. While in early versions it was curved, here it is streamlined, giving a much more balanced look to the movement. The remontoire bridge carries the power train as well as astonishing craftsmanship. After all, this is what separates high watchmaking from others – adding such aesthetic value without disrupting the functionality. Furthermore, the bridges next to the remontoire bridge are neither beveled nor polished to put the emphasis on the highly brushed remontoir bridge and raw German Silver.

Moreover, the mainspring barrel is no longer constrained with the Maltese-cross stop work system and beautifully sunray finished on top. Overall, with its delightful curves, one of a kind movement construction and exemplary finish that puts spotlight where it matters, caliber L043.8 is a marvelous thing to observe from the back. But, how does it work and how different it is from the original one?

As known, Zeitwerk Date shows the time with three discs – hours, minute units and minute tens. In a standard analog watch, we have hands, which are much lighter compared to discs; hence, in the need of less power. Zeitwerk however demands a significant amount of power to snap forward all three discs at the same time, or at least once in every minute for the minutes disc. Remontoire is the mechanism that makes this magic happen precisely in every 60 seconds.

The pretensioned remontoir spring keeps receiving uniform amounts of energy from the mainspring via the centre wheel and the third wheel pinion stores extra power. In this situation, the lower (driving) third wheel is fixed. Meanwhile, the remontoir spring transmits the newly absorbed energy to the upper (driven) third wheel from where it is transferred to the escapement via the rest of the wheel train.

During that time, the lower (driving) third wheel is alternately held by two control pinions. Their upper ends are each configured with a blocking disc and a blocking finger that alternately rest against one of the pallet stones of the Y-shaped control lever. 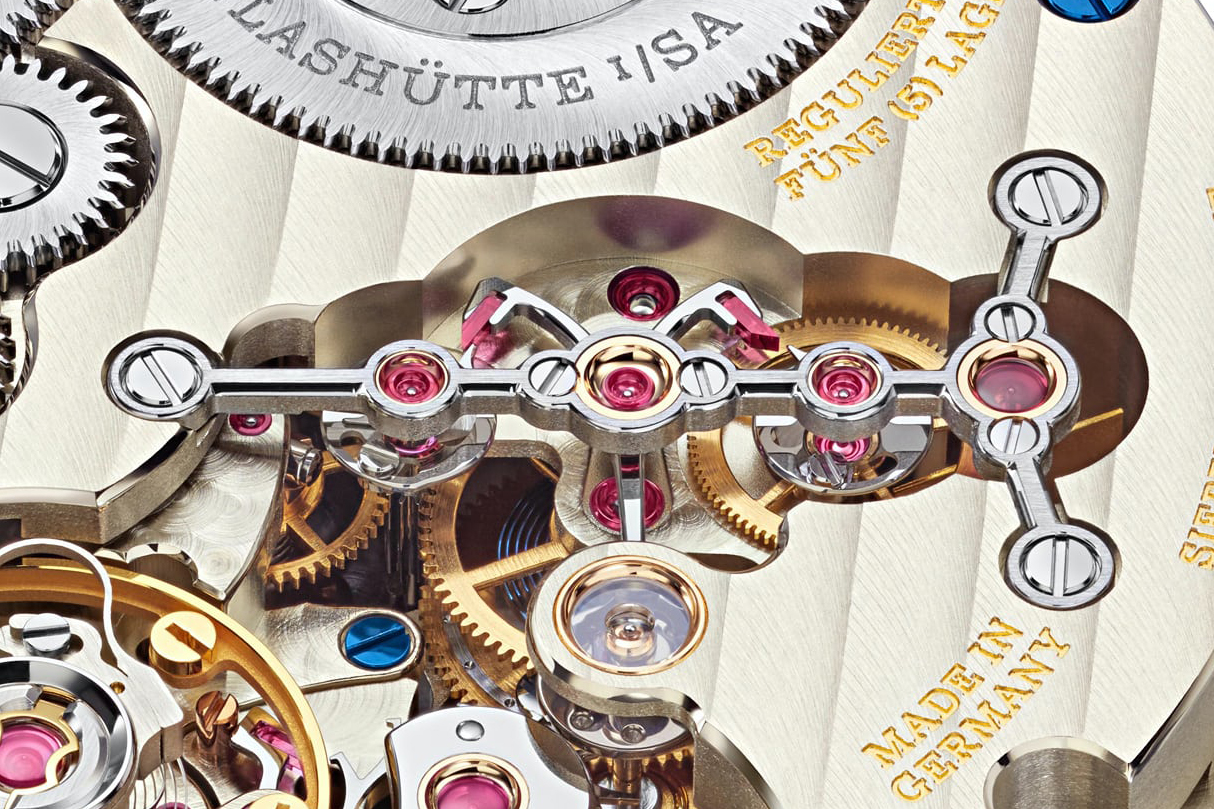 Every 60 seconds, the lower (driving) third wheel is released by the slightly rotating control pinions, and thus generates an energy impulse for switching the disc mechanism of the Zeitwerk Date. This process is regulated by the control lever with its cyclical pivoting motion derived from the fourth wheel. With the fourth wheel, the eccentric roller on the same arbor rotates once a minute, causing the control lever to move back and forth.

The process above is standard for all models. However, Zeitwerk Date has more in its arsenal: New, patented double barrel system. Despite the inclusion of the new date mechanism, the new caliber boasts twice as much power reserve – 72 hours (the original Zeitwerk has 36) and somehow manages to be thinner than the original version. The trick lies in the construction of the mainspring barrel and subsequent fine tuning.

The advantage of this construction is that while the watch is running, the friction loss produced by the lower barrel core between jewel bearings is smaller than while winding. This ensures the optimised utilisation of the stored energy and contributes to an increase in the maximum power reserve.

Figure 1: The inner workings of the barrel.

Figure 2: The sun-ray finished wheels on top of the barrel. Please note that the Zeitwerk Date’s caliber removed the maltese-cross that was used in the previous generations. Because the torque distribution is now much better managed.

Both the diagram and the photo is courtesy of Lange Uhren GmbH. 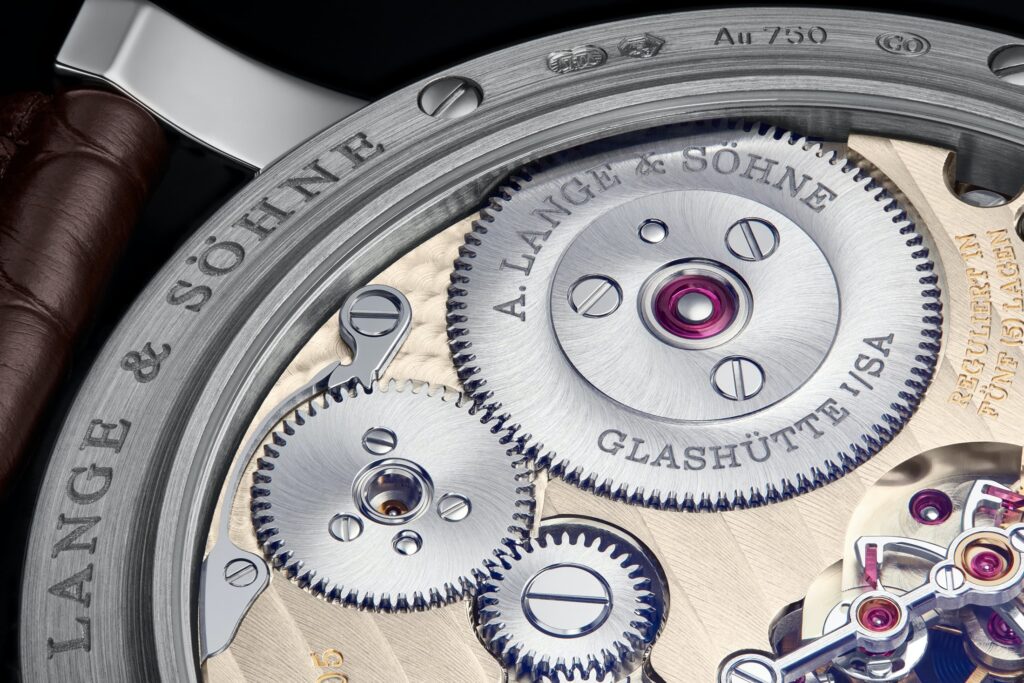 Zeitwerk Date’s caliber L043.8 contains two of the longest mainsprings that the brand produces – instead of just one, shorter spring before. To open up a place for the additional spring, Lange re-arranged the barrel design to stack both of the springs on top of each other. In effect, the remontoir mechanism as well as the balance system is slightly modified (lighter balance wheel, thinner remontoir spring) to accompany the new torque.

It is this mind-blowing piece of engineering and fine tuning by watchmakers that makes the discs jump precisely at 60 seconds, 1610 times a day and 4830 times throughout its three days of power reserve.

As of March 2021, the retail price for the Zeitwerk Date is €98.200, sitting right in between the Zeitwerk Striking Time and the basic version. For its market price, I have written the following at the time when I wrote this article, before any Zeitwerk Date showed up in the market:

One personal opinion note: As it is widely known, Lange is switching to boutique model as Audemars Piguet has been doing for the last decade or so; thus, discounts are becoming a thing of the past for the brand. Hence, knowing that this model has a strong demand as well as it is going to be rare (Zeitwerk department is small, the watch takes time to assemble; thus they can only produce certain number), I would argue that if it ever drops in the second market, it would sell very close to retail price in the second market – or possibly even more.

Since its introduction, the Zeitwerk Date appeared only once at an auction and sold for $97.2k including premium.

There are rumours that A. Lange & Söhne is going to unleash another Zeitwerk Model with Lumen treatment and considering the shockwaves this watch is going create, I can only see an upward trajectory for the Zeitwerk Date.

I hope this was a valuable guide for whomever is looking for a Zeitwerk Date or just want to learn the details and history of these pieces. If you’d like to chat, sell or buy a Zeitwerk Date, please kindly reach out to me via alp@langepedia.com