Following its groundbreaking re-birth in 1994 with astonishing pieces such as Lange 1 and Tourbillon Pour le Mérite, A. Lange & Söhne successfully signalled that it came back for the highest echelon of watchmaking. Such a claim was apparently not for nothing as the brand cemented its place even further with pieces like Datograph in 1999, Double Split in 2004 and Tourbograph in 2005 both in terms of complications and overall characteristics.

Yet, A. Lange & Söhne was a late comer to the market. After more than 50 years of exile, there was no recognition for the brand other than few connoiseurs, mainly from German Speaking countries. Hence, Lange had to climb-up the so-called product ladder in people’s minds and the way to do this was differentiation.

Albeit exceptionally characteristic and technically superb, the pieces mentioned above were within the boundaries of what we think as a mechanical watch. Even though each had a unique appearance; they were still looking like mechanical watches. They were conversational, but only within the collectors’ circle and for those who really know.

Then came something that I refer to as the second re-birth of A. Lange & Söhne in 2009 – the Zeitwerk. And this one here is the ultimate version of the celebrated line: Zeitwerk Lumen Luminous (140.035) or a.k.a. the Phantom.

Every brand needs a conversation piece. It has been the Nautilus for Patek Philippe for sometime, 11:59 for Audemars Piguet, Richard Mille himself for Richard Mille etc.. Although Lange produced some conversational pieces the conversatin was almost purely around mechanics or wearability or thickness etc. but not out of the perceived image or the looks. A controversy as “this is not Lange” was not heard – until 2009. 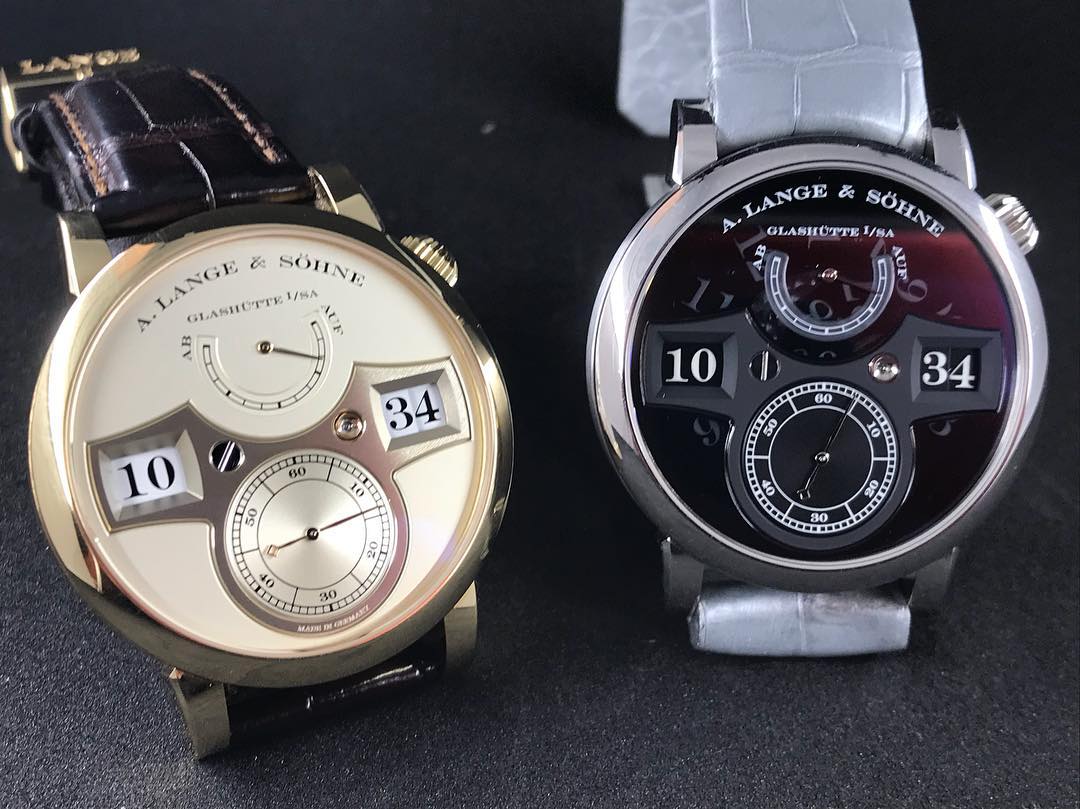 The launch of Zeitwerk was indeed worthy of a conversation. As the veteran product development director of A. Lange & Söhne repeatedly told me: It is (controversy) something you want. Of course it was hard to take critiques but you have to stand up for theproduct and your team. There was controversy, albeit that was something we wanted and expected. As M. Porter says, if your product pleases everyone, you do not have a strategy. In this regard, Zeitwerk was a first from Lange, it was the outlier.

Acquired taste is the best taste says connoisseurs. True that not long after, many recognized Zeitwerk – and today the collection has its name written next to the icons; Lange 1 and Datograph. The calculated risk paid off handsomely and introduced A. Lange & Söhne to a clientele that was never into the brand before while not alienating the base it already had.

Lange was quick to fan the flame and only after some months after the initial release, the watch for Batman arrived. The Zeitwerk Lumen Phantom, reference 140.035 is limited to 100 pieces and made of platinum.

Zeitwerk Lumen measures the same as its patriarch – a proportionate, comfortable and solid 41.9 mms in diameter and 12.6 mms in thickness. The tasteful composition of strangeness starts with the case – namely the crown at 2 o’clock. Such arrangement is a result of the movement architecture that brings Zeitwerk to life, as the balance wheel occupies the usual 3 o’clock position. Due to its size, it is very easy to operate.

The case architecture is typical A. Lange & Söhne – three body as the polished caseback ring, brushed case band and polished bezel. The brush in between mirror polished surfaces delivers a much needed contrast as well as a visual illusion by relatively hiding the thickness. As usual, the lugs are notched at the base, mirror polished and superbly detailed on edges. Furthermore, lugs’ curve tremendously increases the comfort and Zeitwerk Lumen hugs the wrist just nice. 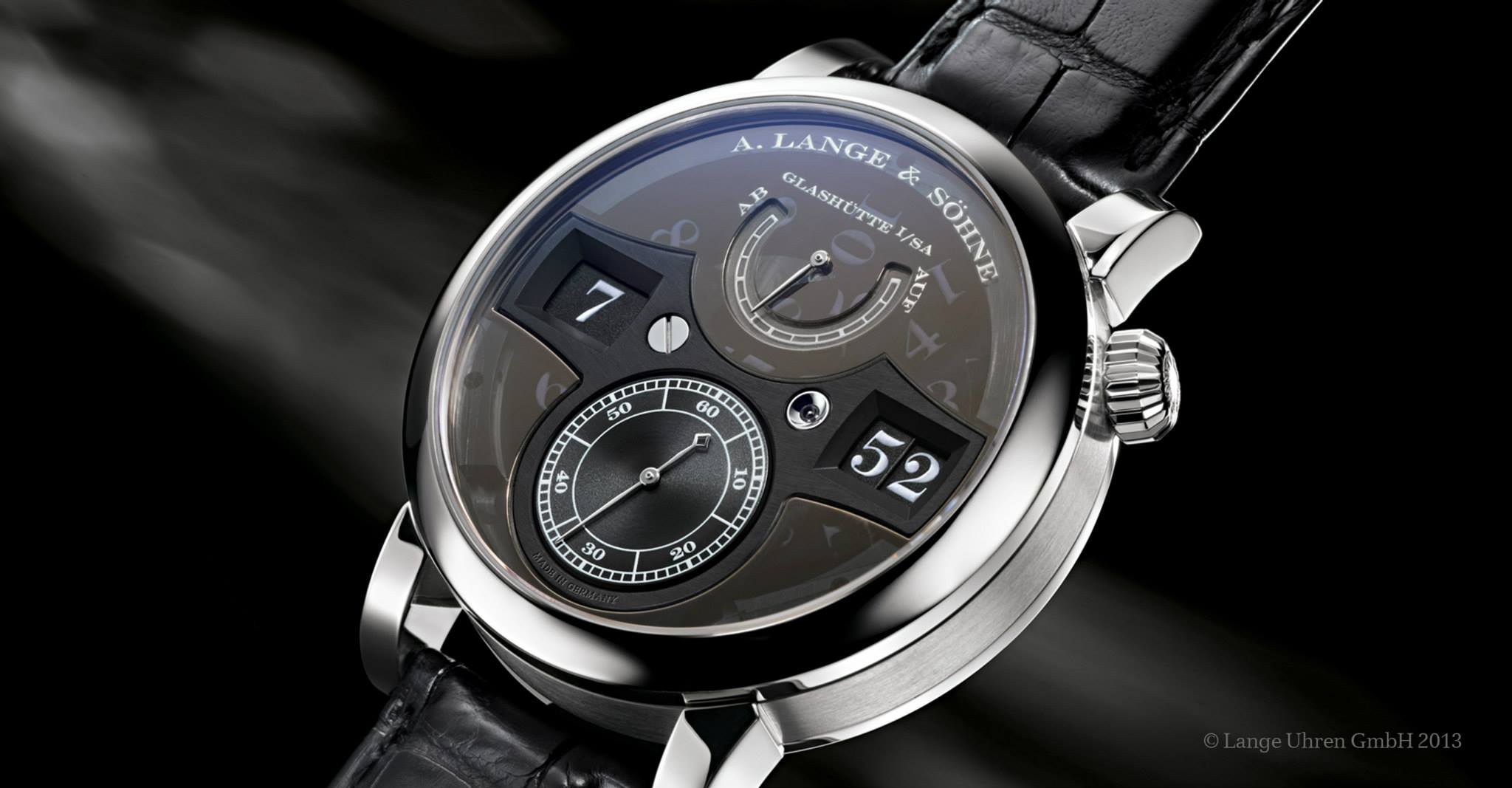 The real treat with Zeitwerk Lumen however is unquestionably the dial. Its ancestor was a home run itself – a cool watch from Lange for the first time. But somehow, this manufacture from the modest town of Glashütte managed to make it even cooler. To me, this is the most badass and defiant watch ever created by A. Lange & Söhne.

There were two intentions while designing the Zeitwerk: 1) Creating an analog-digital watch. 2) Doing this by placing the discs side by side. The idea of placing indications horizontally goes back to IWC’s Pallweber in the 19th century but A. Lange & Söhne is the first to master such execution, overcoming all of its aesthetic and technical challenges.

The most striking design element of the deceptively simple dial are the windows; which is the modern interpretation of the famous 5 Minute Clock in Dresden’s Semper Opera House made by Ferdinand Adolph Lange and his tutor and then father-in-law Gutkaes in 1841. Zeitwerk Lumen’s layout is a lesson on bringing a traditional element from 150 years ago and adapting it to modernity.

Zeitwerk Lumen was introduced in 2010 and it is the first piece of the Lumen collection of A. Lange & Söhne. According to Anthony De Haas, the idea came at night while he was trying to read the time on Zeitwerk. Alas he could not – simply because Zeitwerk has no lume spots. The only possible solution was to lume up the discs. However, since the discs change frequently (60 seconds for minute disc, 10 minutes for decimal and so on) there was no time to charge up the lume. Thereby the idea of charging the discs while they’re hidden beneath the smoked sapphire arrived. The smoky sapphire glass acts as a reversed sunglass and allows only UV rays to pass. As the SuperLumiNova charges throughout the day with UV, it creates an enticing glow in the dark. The German Silver time bridge is coated in black – creates a very strong visual harmony. Especially at night, with the lume coming alive, the contrast between the black and green is a sight to behold.

The disc jump is so fast and accurate; one wants to meet with the watchmaker and hand over a medal for the meticulous adjustment. If you blink, you lose it and you have to wait for the next minute. What is more fascinating, this accuracy never fails. No wonder the Zeitwerk has its own special department and purposefully trained watchmakers within the manufacture. Caliber L043.3 (not the L043.1 as the basic version) of Zeitwerk Lumen does not house any technical differences from its predecessor. It is still the same exceptional movement beating at 2.5 Hz, boasting 36 hours of power reserve and a patented remontoire mechanism blessed with a unique architecture and a myriad of expertly applied finish techniques. 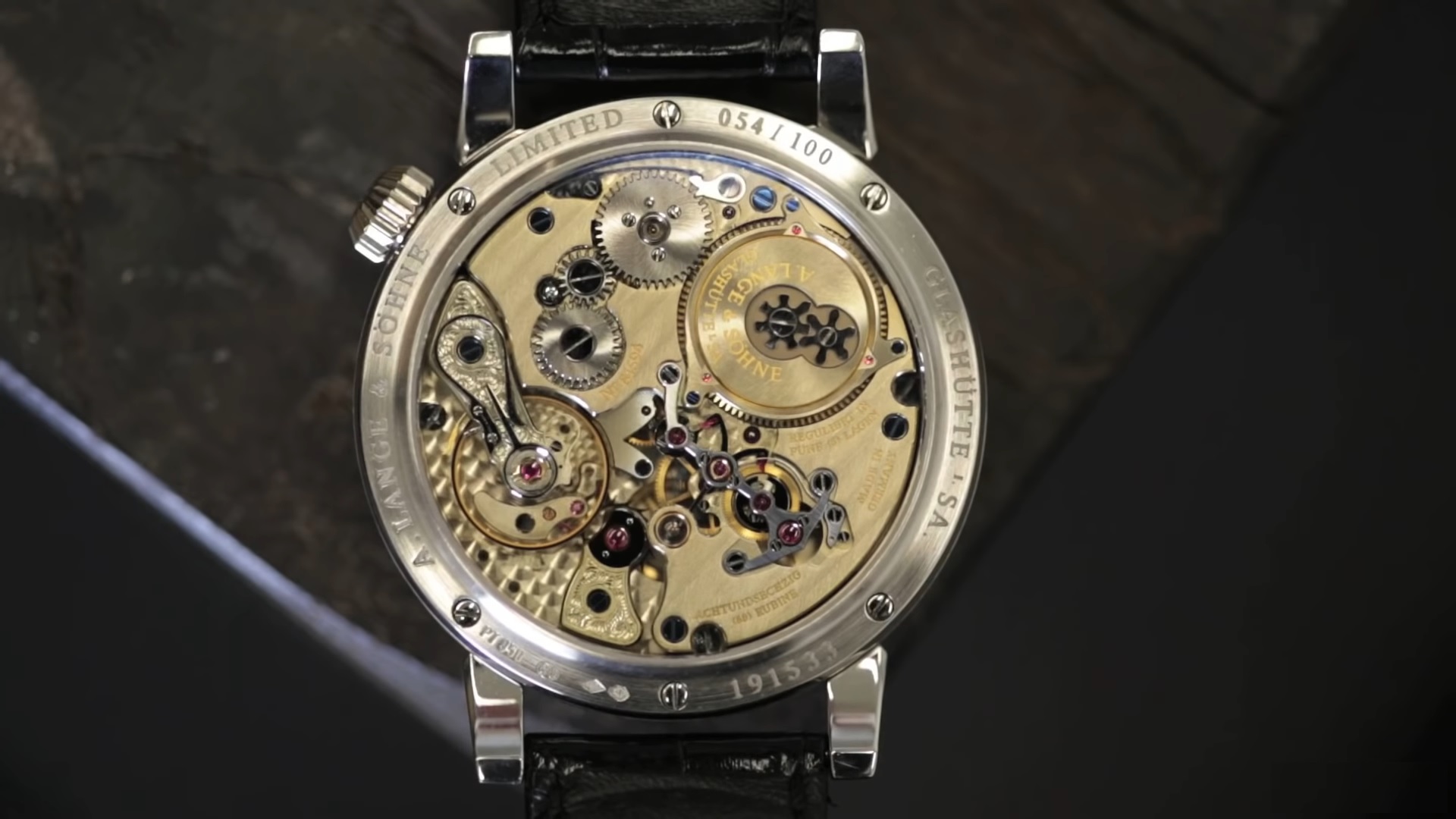 You can read all about the working principle of this one of a kind caliber extensively via the Zeitwerk article which covers everything from the movement’s conception to its development and ticking.

A. Lange & Söhne expanded the Lumen collection by re-visiting the Zeitwerk Lumen on 24th October 2021. The beloved phantom of ours is offered in honey gold with the updated mechanism derived from the more user friendly Zeitwerk Date caliber.

The honey gold Zeitwerk Lumen is limited to 200 pieces. Apart from its case, the new edition shows a few differences compared to the original platinum variant. The most striking one perhaps is the famous time bridge. Instead of the prior full black on the reference 140.035, now it is in more silver colour, closer to the regular variant’s tone. In my opinion, this takes the badassery from the Phantom but still, far from being a deal breaker! Far less pronounced for a “gold”. Brilliant capture by lesrhabilleurs.com

Moreover, the new Zeitwerk Lumen received the hour digit pusher upgrade from Zeitwerk Date. Prior to this upgrade, you had to pull the crown and advance the minute digits to reach the desired hour. Now, this fantastic watch is much easier to set with this quick adjuster. Since the new Zeitwerk Lumen utilizes the caliber L043.9, it comes with 72 hours of power reserve – double the amount compared to the previous generation. 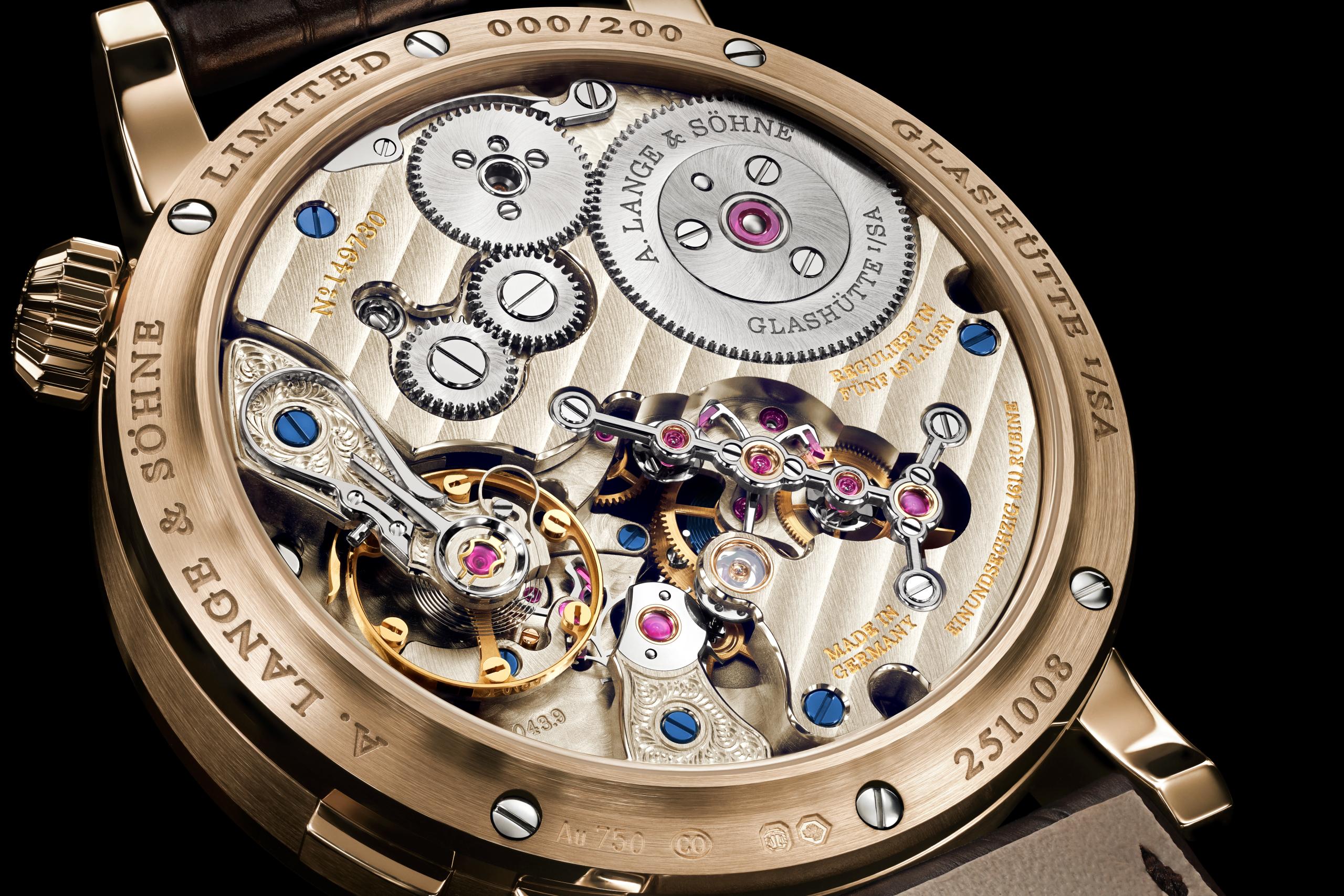 The price of the new Zeitwerk Lumen is $145k. This is a steep increase compared to its platinum sibling from 2010 which was offered at $91k. However, looking at the recent auction results of Lumen pieces, it is logical that Lange wanted a piece of the action too, hence its MSRP. Even though strict bundling practices left a bad taste in many collectors’ mouth, the new Zeitwerk Lumen is surely going to sell out in short notice, and prove itself at auctions or the secondary market soon enough.

The Verdict: A Masterpiece

Zeitwerk (arguably) is one of the turning points in modern watchmaking. Following the trailblazer Opus 3, it is the first mechanical watch to digitally display hours and minutes. A third (Lange 1 and Datograph being the other two) shock for the industry from a small manufacture in a town called Glashütte which is only known by hardcore watch enthusiasts. A contradiction in appearence, albeit the best watch to reflect A. Lange & Söhne’s innovative, never standing still soul. An aesthetic and technical masterpiece.

Zeitwerk Lumen or the so-called Phantom builds on this legacy and somehow manages to elevate it. It is such a marvelous thing, it is impossible to look away when on the wrist. From trying to catch the light at different angles to see the discs beneath the sapphire glass to feeling the strong impulse every minute, this platinum piece of art is a must have for any collector if affordable.

For me, Zeitwerk Lumen is the best watch I have ever seen.

I hope this was a valuable guide for whomever is looking for a Zeitwerk Lumen or just want to learn the details and history of these pieces. If you’d like to chat, sell or buy a Zeitwerk Lumen, please kindly reach out to me via alp@langepedia.com